With sesame oil and toasted coconut

After a week of eating everything set in front of me and drinking too much- I was ready for some greens.

Kale is chopped and mixed with coconut, olive oil, sesame oil and some soy sauce.  Incidentally, I picked up a huge tub of precut Kale at QFC in the bagged salad section.  Easy Breezy.  This gets baked for about 15 minutes and turned a couple of times. 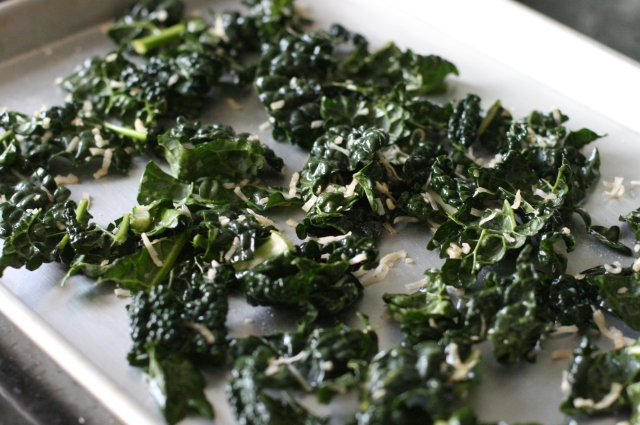 Out of the oven, it is super crispy- like a chip.  The only other time I had made kale like this was at my cousin, Geri’s house.  She had me bbq and though delicious, it was sort of a pain in the a**.  This was WAY easy.  It looks something like this:

I piled mine on some cooked Farro though I think any brown grain would be good.  It really could be eaten without a grain- but wouldn’t be very filling.

All I can say is that I will have no problem going through that giant tub of Kale residing in my fridge.  It was REALLY good.

One more note- the recipe says that it will serve four.  I’m not sure on what planet that is happening.  I think you can keep the same amount of the grain- but you will want to double everything else for sure.

I also only had sweetened coconut at home- I recognize this is semi- sacrilegious, but I used it- and just brought the amount down to a tablespoon or so.  Next time I will pay more attention to my pantry before going to the store.

This entry was posted in Uncategorized. Bookmark the permalink.