I was on vacation for a week and not eating healthy at all.  Unless you consider cheetos, doritos, and any other manner of orange things with over 20 ingredients healthy.  I was happy to come back and start cooking out of our new book:

I hadn’t purchased the book yet- so I started with the blog.

Start with some croutons- torn bread, mixed with a combo of olive oil, butter, salt and whole grain mustard. 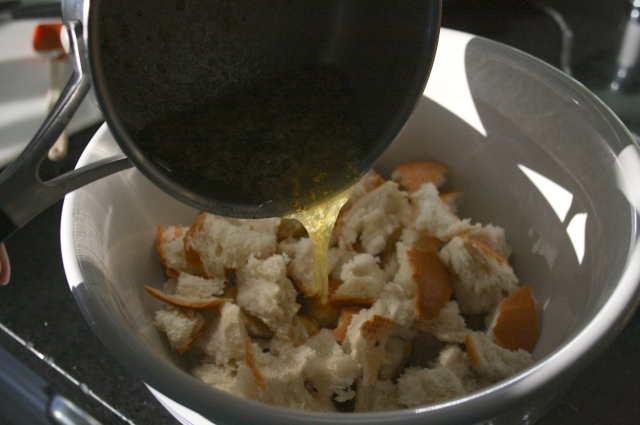 They get baked and tossed in the oven.  The directions said 10- 15 minutes- but mine took upwards of a half an hour.  It didn’t matter though because that’s about how long it took me to do the soup start to finish.   When they were done the were Delish!   AND really easy- which counts.  I stored half for future use.

While the croutons are baking away, you start with sautéing some onions

Adding potato and covering for four minutes.  (After two minutes my potato was sticking to the bottom) yes- I peeked- so I added broth a bit early to stop from scorching.

She uses vegetable broth but says early on in the book that it’s OK to sub- so I used chicken broth because that’s what I had in the freezer.

The potatoes simmered for about 4 minutes and were done.  Broccoli goes in, another four minutes.

This all gets whirled in the blender.  Then the cheese goes in.

Verdict?  Won’t make again.  It was fine- but not great.  It wasn’t as rich and indulgent as I imagine broccoli cheddar to be.  I suppose that’s the point.  Mark even said it was OK… until I told him we were having it again tonight to which he said that he was going to go out to dinner.

This was a few nights ago.  Last night I tried the Cauliflower soup out of the book to much greater success.  Almost exactly the same- but sub cauliflower to broccoli.  Not as good as Thomas Keller’s… but also isn’t made with heavy cream.  I guess life has its trade offs.

Recipe can be found here.

This entry was posted in soup. Bookmark the permalink.