Posted on November 1, 2012 by Kelli
The weekend preparations for this meal were a bit extensive…but worth it in the end!
I started off visiting Uwajimaya. I went prepared, with brand names written down on my shopping list. I soon discovered I needed to look a few things up on my cell phone. Bing.com images to the rescue!  I wasn’t exactly sure was Bonito or Konbu was, so looking at images helped. Plus I had to pick up some steamed Hum Bao cause it’s my favorite. I walked away with just under $100 worth of groceries.
I started off making the Dashi on Sunday morning. The recipe called for one 6″ piece of Konbu and a “handful” of bonito flakes however I found that it didn’t make enough cups worth for the Katsudon recipe so I made two batches. Kind of a weird process but pretty easy to make. At first I was thinking what is this going to make? But once it started smelling it was familiar. Strain the bonito and refridgerate.

Konbu in the Package 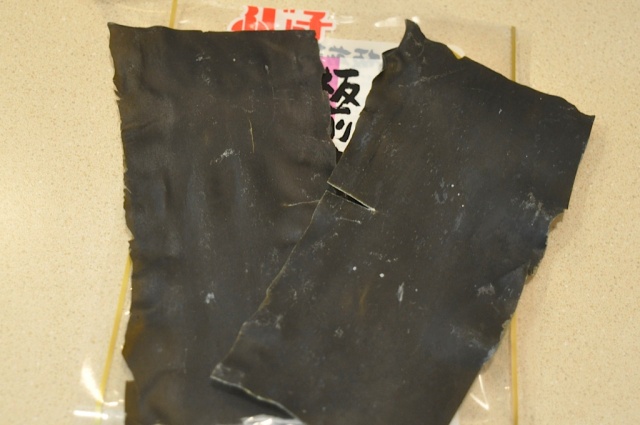 Konbu out of the Package

Boiling the water and bonito Flakes
–
–
Second task, making the Sweet-Vinegared Daikon and Carrots. I treated myself to a new mandolyn, and after a little trial and error it went fairly fast julienning the carrots and daikon. Sprinkle the veggies with a little salt and then squeeze it out. Heat up the vinegar and sugar and then mix and let sit in the fridge (overnight.) 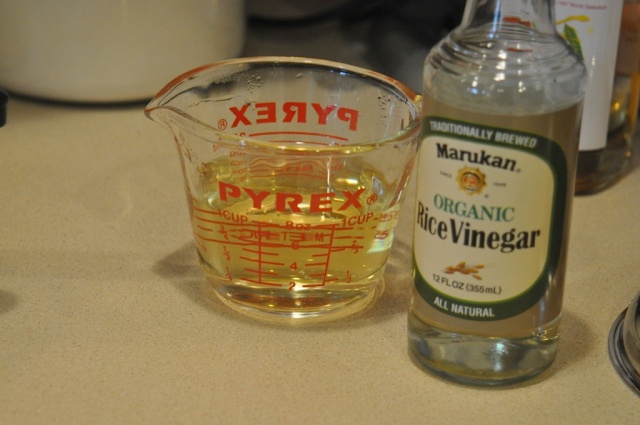 mixing the sugar and the rice wine vinegar 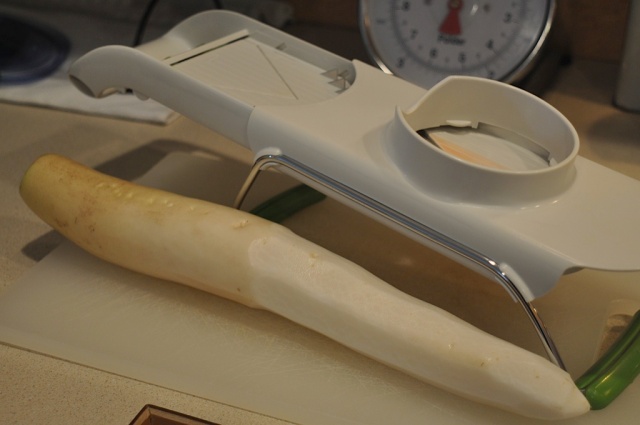 Carrot and Daikon Salad
–
–
Third task, making the Simmered Gyoza. Kelli inspired me to do this one…and boy was it tasty! I sucked at making the gyoza wrappers but ended up making due after a second go-around. Kelli did give me the heads up that it makes WAY more filling than dough, and she was right. I have a big tupperware full of filling in the freezzer so I’ll be making these again soon. The dipping sauce was DELISH! Just perfect, exactly how it tastes in restaurants. 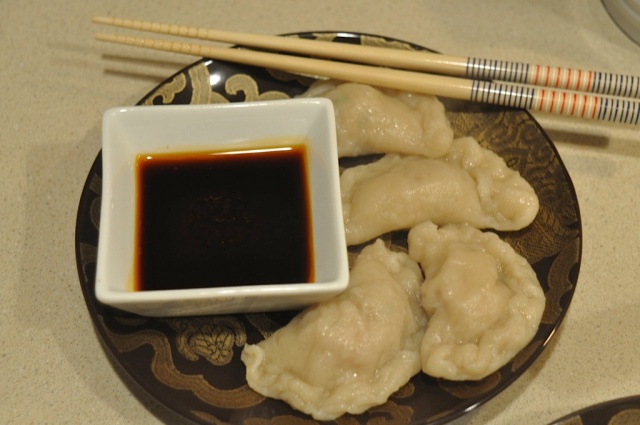 –
–
Lastly, making the Katsudon (Pork Cutlets with Soy Sauce-Flavored Egg.) I’ve often had this in restaurants and can’t seem to find a place that does it well. This was sooooo good, and exactly how I dreamed it would be. It was pretty easy, just a little preparation ahead of time.Making the Dashi was the first step. Then pounding out the pork cutlets and dipping them in flour, egg and panko. I didn’t make my own Panko as she suggested, cause I already had too much on my plate. I just bought it in a box at Uwaji. Fry up the cutlets in a little peanut oil and then slice them. Meanwhile cook the thinly sliced onion, ginger and dashi in a pan. Once I smelled this cooking, I realized that I was on track! Mix in some soy sauce and mirin. Then place the cutlets on top and pour (swirl) the beaten egg over the top. Once it’s pretty much cooked scoop it up on top of rice. I served it with some Sapporo beer and ta-da! It was soooo good. 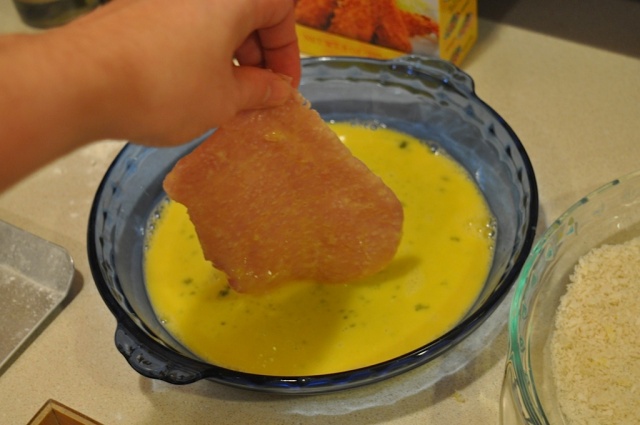 Dip the pork in the egg. 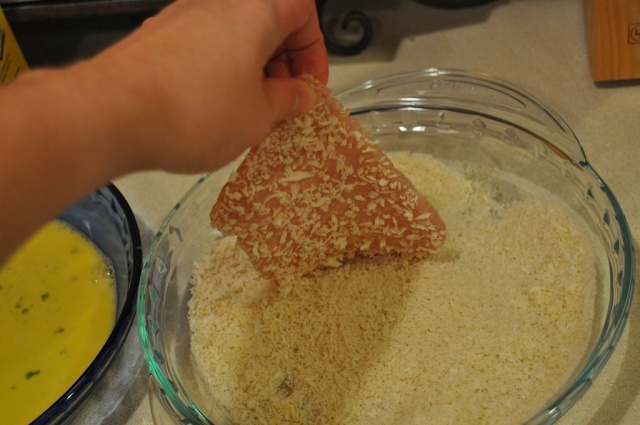 Coat it with Panko…

Fry up the pork cutlets 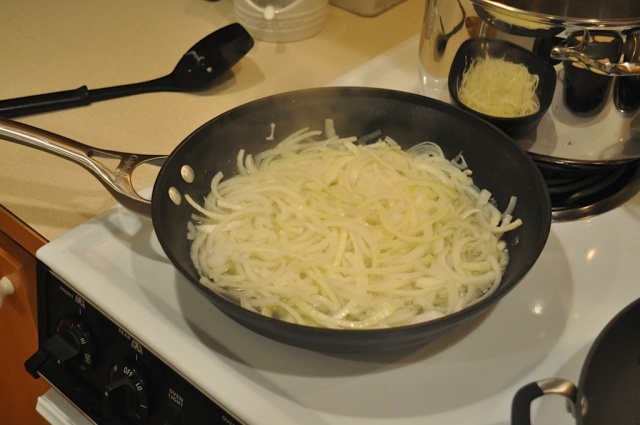 Simmer the onions in ginger and Dashi.

Swirl in the egg on top. 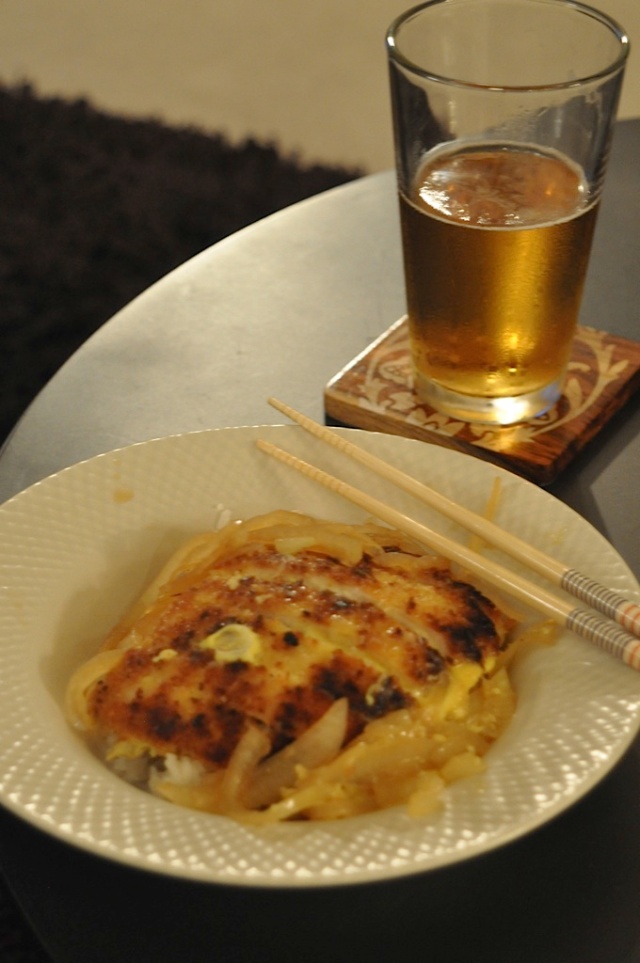 YUM!
–
–
My kitchen is a total mess, but i have some great leftovers for tomorrow. Overall, I wouldn’t do all these things in one night again, but I would definitely make all of them again solo. The one thing I noticed about her writing style is that she says things like “boil for a few minutes…and then a few more.” I need specifics. However it ended up working out and I guess I just have to experiment to get the right timing. Plus a trip to Uwajimaya doesn’t seem so foreign to me anymore. 🙂