First of all, I am no pie maker.  Secondly, growing up, I never liked cherry pie.  So this doesn’t seem like a likely candidate to serve to the neighborhood ladies that were coming over for wine and pie night…(I only knew two of the seven)  Bold move- but sometimes you have to trust that a fabulous chef can make even a no cherry eating non-pie maker look like a baker.  Fingers crossed.

seven cups of cherries- that’s a lot of cherries and a lot of pits.  I got the hand held XO Cherry pitter to help.  I love it.

Two of the cups go in the blender and get pureed and poured in a medium sauce pan with sugar.  This simmers for about a half hour. 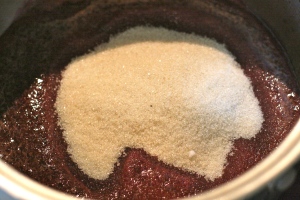 When it’s done, mix with a slurry and some vanilla and the rest of the cherries- pitted, but whole.

Fill the pie shell with your mix and revel at how lovely it is.

Then impress yourself with your top pie crust and pop it in the oven.

After about 40 minutes your house will smell amazing and your pie will look something like this: 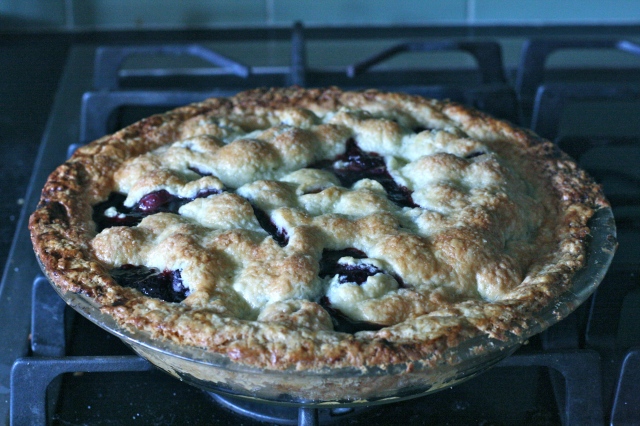 Now, what I can tell you is that I cut this into eight large slices and served them to seven ladies.  There was not a scrap left on anyone’s plates.  THREE of them admitted that they didn’t think they liked cherry pie- so apparently I was in good company.  Seems we just don’t like canned filling.

I would love to show you how beautiful it looks on a plate next to a scoop of vanilla ice cream, but where I may be brave enough to serve cherry pie to people I don’t know, I’m not brave enough to take pictures of my fork in mixed company.

This is the sad piece that was left- that I ate for breakfast in the morning.

Worth the effort- and I will say that this is by far my most successful pie attempt.  The crust is AMAZING.  Super flaky and delicious.

This recipe is from Ad Hoc at Home

This entry was posted in dessert, Kitchen Diaries. Bookmark the permalink.