Peperoni al Forno (Roasted Peppers with Garlic and Parsley) and Fennel and Lemon Salad.  mmmm…. vegetable dishes I can stand behind.

Lets start with the roasted peppers- 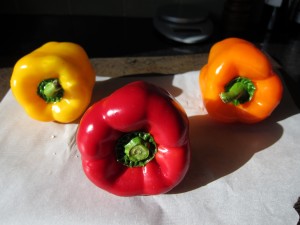 Typically, when I am roasting peppers, I just put them directly over my gas stove and turn frequently until they are blackened everywhere.  Then I pop them in a paper bag for about ten minutes and the peel slides off.

In this recipe, it called for putting them in the oven on 450 for about 25 minutes, turning them and cooking for another 15, or until they collapse and begin to blacken.

At this point, I was apprehensive about taking them out- they weren’t as black as I usually do them, but who am I to argue.  They are certainly beginning to blacken.

I was right to be concerned.  When I went to peel them- it made a huge mess.  The peel wasn’t coming off- it was sort of a disaster and looked quite grizzly on my work surface. 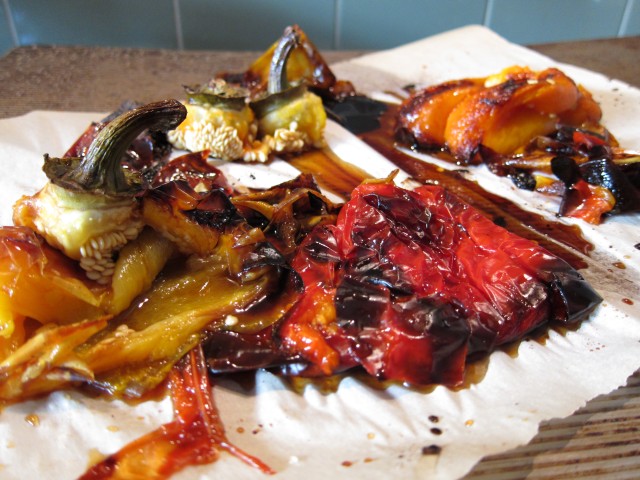 I will say that the final dish was delicious.  Once peeled, they are sprinkled with a bit of olive oil, a clove of minced garlic, and some parsley.  What could be wrong with that?

Next time I will go back to my way of roasting the peppers though.  This didn’t work for me as well.  That’s why we try new things though eh? 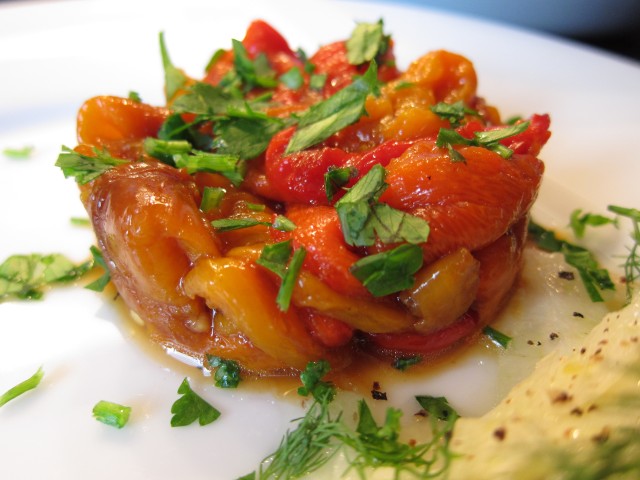 The Fennel and Lemon Salad was even easier.

Thinly slice the Fennel and add lemon juice, a drizzle of olive oil, a sprinkle of salt and pepper and pop it on a plate.  Sprinkle with some lemon zest and some of the fluffy fronds.

Easy, adds some acid to the dish, and was tasty.  Great basic summer side.

I made these two dishes as part of a suggested menu from Cooking with Italian Grandmothers.    They paired quite nicely with the Timpan di Patate and added some color to the plate.

This entry was posted in Italian, Kitchen Diaries, Side Dish. Bookmark the permalink.