What could be wrong with that?

This recipe from Cooking with Italian Grandmothers has everything you could hope for… potato, butter, cured meats, smoked cheese- delicious.

This is actually the main dish in a three part menu that I made over the weekend.

When cooking for just our immediate family, I try to cut down the recipe as much as possible because I have zero self control.  If I make something that is supposed to serve eight, rest assured that Mark will eat one serving and I’ll eat seven.  Mason will probably pick at his food and settle on a grape.

This is to say that sometimes my conversions get a little lost in translation… particularly when deciding what to cook something in… see for yourself.

At any rate, boil some yukon gold potatoes for about 15 minutes in some salted water. 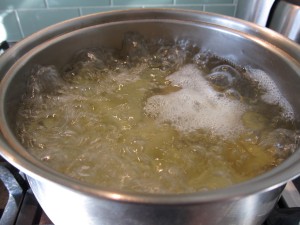 Then realize- whoops, I was supposed to peel them first.  Crap.  Then kiss your potato ricer and apologize for all of the bad things you say about it (takes up too much space) and thank it for doing the peeling for you. 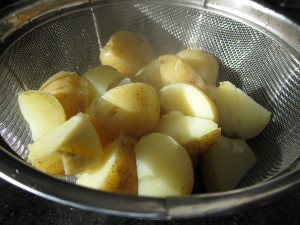 Once they are light and fluffy and peel free, add some butter, milk, and salt.  Mix it all together. 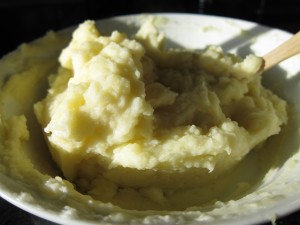 Next, separate an egg, whip the whites into peaks and fold into the potatoes.  Take out your smoked mozzarella and cut it into small pieces.  Revel in the fact that there is actual sunlight coming through the window.

Seriously, is there anything better than sun and smoked mozzarella?  I think not.

This is where it starts to get hairy.  You’re supposed to butter a 9×13 pan and spread an inch of the potato mixture on the bottom.  because I cut this recipe in thirds, I had to choose a substantially smaller pan.  I did some quick math, and the area of the pan was the same.

I should know by now that when in doubt, go for the larger pan- but I digress…

Here’s the potato in the pan- one inch thick.  Add some smoked mozzarella on top.

Follow that with a single layer of Prosciutto and a generous sprinkle of parmesan.  Don’t mind my over-large hand.  Remember this dish is small.  Ahem. 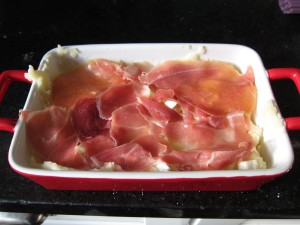 I repeat the layers, and it’s level.  I now have to add one more layer of potato.  I think I’m in the clear because mashed potato will hold it’s form, so even though it is now rising higher than the dish, I’m feeling confident… 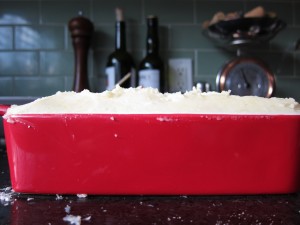 …and then crap.  I realize I’m supposed to pour an egg with the additional yolk on top….Followed by breadcrumbs and more parmesan.  Too late to go back and start over because the layers would be messed up.  If I were on Project Runway, Tim Gunn would be telling me to make it work… so I’m going to. 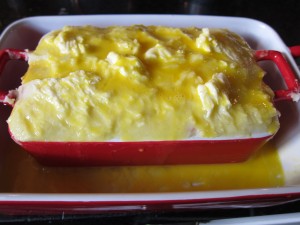 Double pan it and roll with it.  It’s going to make a mess, but hey… could be worse.

Sprinkle the eggy mess with said bread crumbs and parmesan cheese, and pop it in the oven at 375 for about 40 minutes until it is puffy and brown.

Again, this dish was quite tasty- did not however maintain the layers as I had hoped.  I figured it wouldn’t, but a girl can dream.  The photos in the book look so stunning- but I’m pretty sure it had to have been cold when they cut the gooey potato.  You can imagine.

My less than perfect creation turned out on my plate looking like this:

Could be worse, but certainly not the beauty and sophistication I had hoped for…

I told you this was the main, and Mark and I agreed that though we weren’t full after dinner, it seemed wrong to not have something more substantial on our plates.  What can we say?  We’re Americans.

He actually referred to this as his ‘vegan dinner’ and I had to remind him that it had two types of cheese, butter, milk, eggs, and prosciutto in it.

Quite lovely don’t you think?  I’ll tell you about the sides in a different post.

You can find the full recipe for the potato dish here.